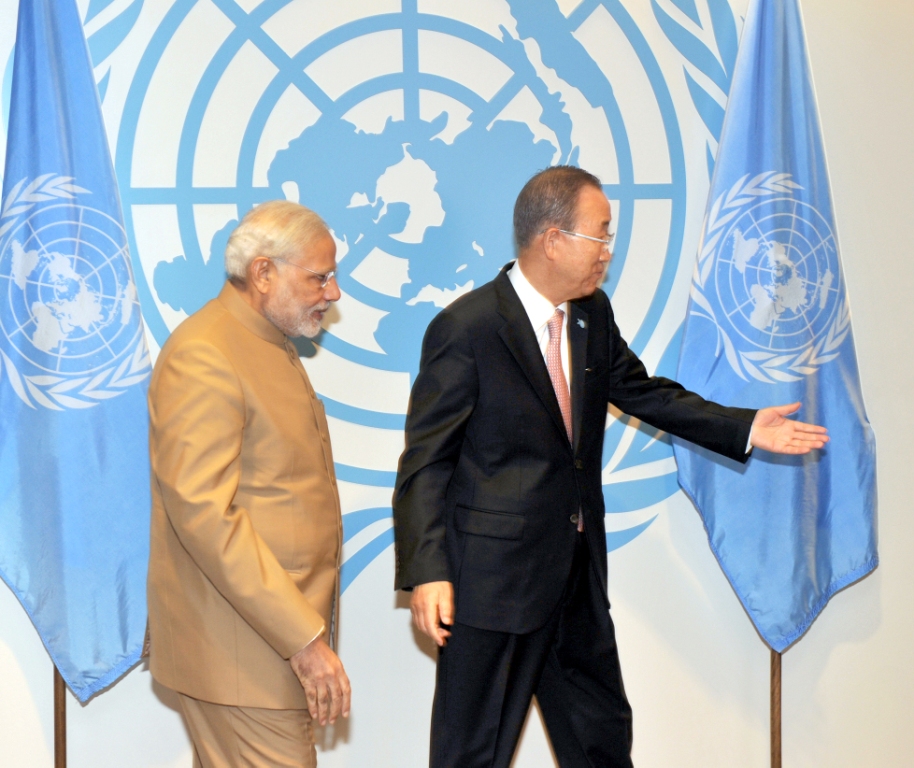 Modi raised the issue of “trust deficit” with developed countries having achieved their level of growth appear to use the climate issue to keep the developing countries from improving the living standards of their people under the pretext of controlling carbon emissions, according to Vikas Swarup, the External Affairs Ministry spokesman.

Making a call for climate justice, Modi said that developing countries should be allowed to develop and placing restrictions and controls on development was not the way to go. Positive measures like concessional financing of climate change projects and transfer of technology were needed to promote sustainable development instead of negative ones that focus on capping carbon emissions, he said.

Ban appeared to recognise these concerns. “The Secretary-General emphasised the need for climate change finance as a key to building trust between developed and developing countries,” according to a statement by Ban’s spokesperson.

He spoke of the tremendous importance of India’s role in renewable energy, and urged Modi to continue to show strong global leadership on this issue, the statement said.

Modi spoke of the goal of developing 175 gigawatts of renewable energy by 2022.

UN peacekeeping operations in which India has been historically the largest troop contributor was another important topic in their discussions. While Ban “commended India for its indispensable contribution to UN peacekeeping,” Modi said the manner in which the Security Council operates now in mandating missions should be changed and it should consult the troop contributing countries.

During his meeting with Ban that preceded his speech to the summit on sustainable development, Modi presented Ban with a book, “India and the United Nations: A Photo Journey, 1945 to 2015” edited by Asoke Kumar Mukerjee, India’s Permanent Representative.

Modi said that the 17 sustainable development goals matched programmes already launced in India, Swarup said. Modi cited the plan for 175 gigawatts of renewable energy, the massive programme for sanitation and cleaning the Ganga as examples of matches with the SDG.

Jim said that Modi’s reforms have had an impact on India and the nation’s strong performance has been very different from that of many countries, according to Swarup.

Modi said that the governance of global organisations like the World Bank have to be strengthened and made more representative.

India was not adequately represented in the governance of the World Bank, Modi told him.