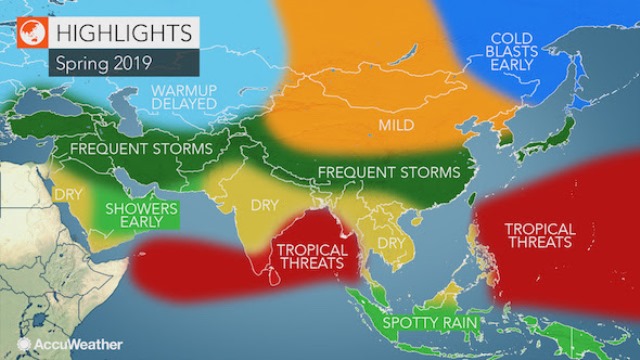 The latest AccuWeather report indicates that the storm track that was active during the winter from the eastern Mediterranean to the Middle East to part of eastern Asia will continue well into the spring.

There will be at least one area of concern for direct tropical impacts in a heavily populated area of the Indian Ocean.

In advance of these storms, strong winds can lead to blowing sand and dust on occasion across southern Iraq, Kuwait and northern and central Saudi Arabia. A couple of the more robust storms can bring locally heavy precipitation.

Fronts from these storms can extend as far south as southern Saudi Arabia, Oman, Kuwait and parts of Yemen.

Mainly early in the spring, the fronts will bring occasional rain showers. There may also be a few strong thunderstorms associated with the fronts.

Severe weather and tornadoes which happened in New Delhi in early February are not likely to be repeated on a widespread scale during the spring.

The active storm track will continue across south-central and south-eastern China to Taiwan, Japan and South Korea.

Similar to the Middle East, the more robust storms can bring locally heavy precipitation, including the risk of flooding.

The storms will meet up with cold shots of air in northern Japan and Manchuria on occasion.

Early in the spring, the cold blasts are likely to cause locally heavy sea-effect snow in western Hokkaido, Japan.

Cold shots of air in northeastern China, including Beijing, and the Koreas are forecast for the spring, especially early on, but much of northern and eastern China to the Koreas and Japan are likely to finish the season with above-average temperatures.

Cold blasts and snow will continue from Ukraine and the Volga Valley to Kazakhstan to start off the spring.

Outside of the influence of tropical storms, areas in Southeast Asia south of the storm track can expect scattered rains this spring that will lead to below-average rainfall.

Indonesia and Malaysia are likely to have frequent enough showers and thunderstorms to bring rainfall close to average.

In northern India and part of Pakistan, storms from the winter, especially in February, brought significant moisture to the soil.

Heat is less likely to be severe in the region, including in New Delhi, due to damp soil conditions during the first part of the spring. There can still be rounds of extreme heat in these areas later in the spring as the soil dries out.

Prior to the arrival of the southwest monsoon, rainfall is likely to be lower than average across central and southern India and may lead to a quick surge in heat.

Rainfall is predicted to be near average over Sri Lanka with more typical temperatures for the spring.

There is the risk of tropical activity in the western Pacific, the Bay of Bengal and the Arabian Sea this spring, mainly later in the season.

In the Pacific, the greatest threat of tropical development and direct impact is from Guam to the Marshall Islands and the Mariana Islands.

There is the likelihood of Pacific storms heading farther west during the summer and autumn.

In the Indian Ocean, there is concern for direct impact from depressions in the Bay of Bengal prior to the monsoon.

The greatest threats from these tropical storms will be from eastern India to Bangladesh and perhaps Myanmar.

While a tropical low or depression cannot be ruled out in the Arabian Sea, the threat to adjacent land areas is minimal at this time.

AccuWeather meteorologists are projecting close to the average number of tropical storms, typhoons and super typhoons for the balance of 2019.