The site including nine turbines is located off the M1, six miles from Northampton, which is capable of producing over 7 MW of electricity, enough to meet the annual needs of approximately 3,800 homes.

The plant got approval in May 2013 and the construction started in November 2013. The wind farm became fully operational by June 2014.

Before the commissioning, the company conducted extensive environmental studies and consultation with local people as well as groups. The feedback from local people supported the planning application, says the report. 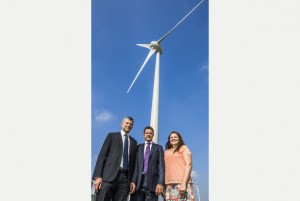 At present, EDF Energy aims to keep the local community involved and takes interest in allowing benefits to locals staying near the plant, by setting up a fund of £27,000 a year split between five local parish councils.

A pavilion for village events was the priority from the list for first year allotted funds along with children’s play equipment and widening a footpath for children on their way to school.

M1 is the latest wind farm in company portfolio and another project that got delivered on time and to the schedule committed to those living nearby, said, Christian Egal, CEO, EDF Energy Renewables.

Developments like M1 represent a real investment in the local area as well as a sign of continuing commitment to low carbon infrastructure across the UK, Egal added.

M1 is another important building block in EDF Energy Renewables’ contribution to the UK’s low carbon economy which is getting expanded all the time. It is hoped for an efficient operation of the wind farm that becomes an enduring part of the local community, said, Nick Bradford, head, Asset Management, EDF Energy Renewables.

EDF Energy to hike tariffs by 12% from Oct in UK