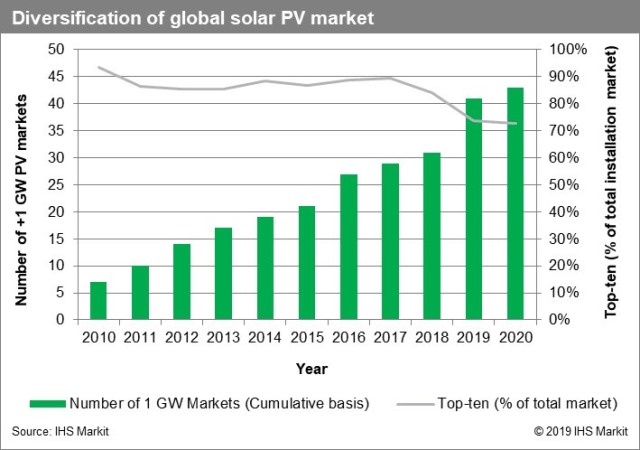 Global solar installations will increase 14 percent in 2020 to reach 142 GW, according to the new 2020 Global Photovoltaic (PV) Demand Forecast by IHS Markit.

The expected 142 GW is seven times that of the entire capacity that had been installed by the start of the prior decade (20 GW in 2010).

There were 7 countries – mainly in Europe — with more than 1 GW of installed capacity in 2010. More than 43 countries will meet that threshold by the end of 2020, said Edurne Zoco, director, Clean Technology & Renewables, IHS Markit.

Large markets such as China will have more market share in terms of new installations into the foreseeable future. The reliance on China for solar installation growth will continue to decrease in coming years, the report said.

“China will remain in the preeminent position as the overall leader in solar installations. But this decade will see new markets emerging in South East Asia, Latin America and the Middle East,” said Zoco. 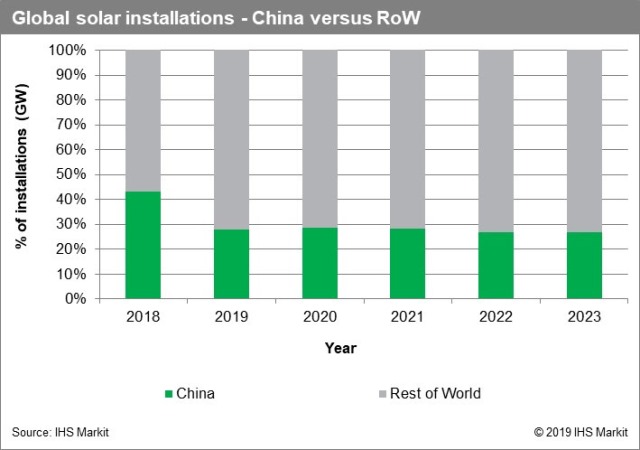 China’s solar demand in 2020 will be lower than historic installation peaks of 50 GW in 2017. China is the largest solar market in the world.

Solar installations in United States are expected to grow 20 percent in 2020. United States is the world’s second largest market. California, Texas, Florida, North Carolina and New York will be key drivers of U.S. demand growth over the next five years.

Europe nearly doubled installations in 2019. Europe is expected to grow at 5 percent in 2020, adding more than 24 GW. Spain, Germany, Netherlands, France, Italy and Ukraine will be leading sources of demand, accounting for 63 percent of total EU installations in the coming year.

India had a flat year in 2019, due to policy uncertainties and the impact of import duties on solar cells and modules. Solar installations in India are expected to grow again and surpass 14 GW in 2020. Lower module prices and a large pipeline of projects are expected to spur the return to growth.