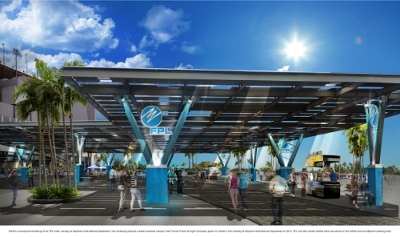 Florida Power & Light Company (FPL) and Daytona International Speedway (DIS) are entering into a tie-up to install solar power at the World Center of Racing.

The program is designed as part of the ongoing $400 million DAYTONA Rising Re-development Project.

With a total generating capacity of around 1.7 MW, the project is one of the largest distributed solar installations in Florida.

Around 5,000 solar panels on multiple canopy-like structures, offering areas of shade will be constructed outside the front stretch, in the Sprint FANZONE and in one of the Speedway’s parking lots.

The clean energy generated is expected to prevent the emission of an estimated 2,200 metric tons of carbon dioxide each year.

FPL will begin construction on the installation by this fall, with the aim of connecting it to the grid by the end of the year.

In addition, the installation will include high-tech data-gathering equipment that will provide FPL with real-time and long-term data to help the company continue incorporating more solar power into the grid in the future.

Once the installation is completed, DIS will rank fifth-largest among U.S. professional sports facilities for solar energy capacity.

Daytona International Speedway is a Florida landmark and an American icon.

FPL is a subsidiary of Florida-based NextEra Energy, Official Renewable Energy Provider of both Daytona International Speedway and Homestead-Miami Speedway.

FPL expects to triple its current solar capacity by adding around 225 MW of new solar power in Florida before the end of 2016.