The demand for renewable electricity in Europe, documented with Guarantees of Origin (GOs), has grown briskly in 2016 – up 5 percent from 2015 and reaching nearly 370 TWh, says ECOHZ, based on statistics from the Association of Issuing Bodies (AIB).

“Behind this growth are thousands of businesses and millions of households in numerous European countries purchasing renewable electricity documented with Guarantees of Origin,” said Tom Lindberg, managing director at ECOHZ.

“Much of the demand is driven by an increased sense of urgency among leading international businesses in contributing to combating climate change – by switching from fossil based power to clean, renewable energy,” says Lindberg. 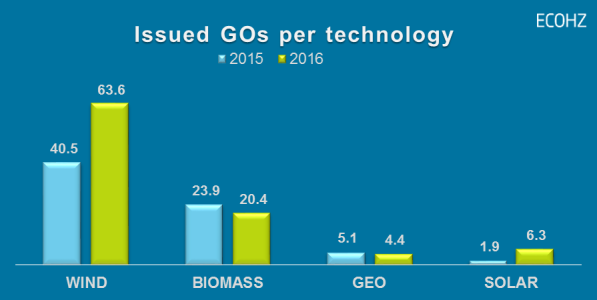 This global backdrop has inspired leading companies across various industries to take charge of their destiny and define a clear sustainability agenda as critical to their future competitiveness. The last two years have seen several initiatives arise, many with similar goals of securing access to renewables to power all operations, in all corners of the world.

The most far-reaching initiatives are WeMeanBusiness and the RE100. The RE100 initiative now has 87 corporate members that have all publicly pledged to consume 100 percent renewable energy. A large majority of companies have committed to achieving this by 2020.

Based on recent statistics from the AIB the European growth trend continues in 2016. From 2011 to 2016 the market experienced an annual growth (CAGR) of 12,5 percent.

Germany, Switzerland, Sweden and Holland are still the largest markets for renewable purchases in Europe. Holland’s market continues to grow, at a faster pace than the rest, and nearly reached 50 TWh purchased in 2016.

The German market is still the largest in Europe, but its rapid growth driven by demand has halted. Purchased volumes in 2016 will likely be in line with the 2015 figures – 85-87 TWh. 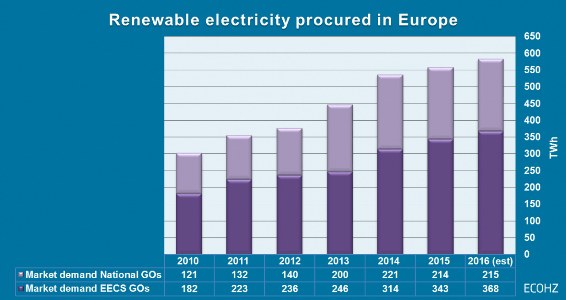 Italy and France: both latecomers in the market continue to show robust growth, and their markets are increasing in significance.

“Spain joined AIB in 2016, and although it was off to a slow start, has shown impressive speed in providing new volumes of renewables to the marketplace – issuing nearly 50 TWh,” says Lindberg.

Although the UK is now the only remaining large renewable producer not actively participating in the European market, its new renewable energy policy frameworks allow for imports of certain European EECS GO for domestic use. This has contributed to the overall demand growth in 2016, and shows the importance of having the UK as a full AIB member, according to ECOHZ.

The supply of solar and wind power documented with EECS GO, grew by 300 percent and 50 percent respectively – providing nearly 70 TWh to the marketplace. Hydropower still dominates the market with an approximate 75 percent “market share”, but growth has slowed.

There are still European markets with national systems that have yet to adopt the EECS standard, and that do not participate in the Pan-European market place. These markets total more than 200 TWh of purchased renewable power – thus pushing the actual market volume renewable toward the 600 TWh mark for 2016. This is 50 percent of all renewable power production in Europe.

Ethiopia plans addition of 12 gigawatts of RE capacity by 2020