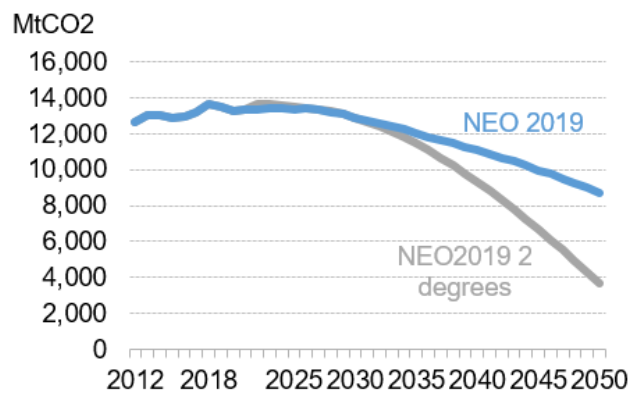 Drop in wind, solar and battery technology costs will result in a grid nearly half-powered by the two fast-growing renewable energy sources by 2050, according to the latest projections from BloombergNEF (BNEF).

Two-thirds of the wind or solar represents the least expensive option for adding new power-generating capacity. Electricity demand is set to increase 62 percent, resulting in generating capacity almost tripling between 2018 and 2050. This will attract $13.3 trillion in investment, New Energy Outlook 2019 (NEO) from BloombergNEF.

Coal’s role in the power mix will be falling from 37 percent today to 12 percent by 2050 while oil as a power-generating source is virtually eliminated.

Wind and solar grow from 7 percent of generation to 48 percent by 2050. The contributions of hydro, natural gas, and nuclear remain roughly level on a percentage basis. 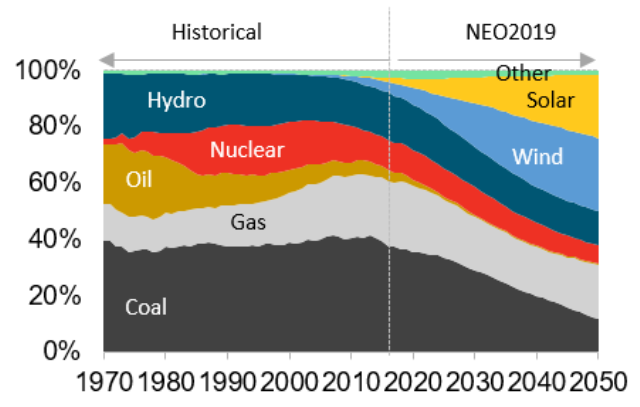 Solar photovoltaic modules, wind turbines and lithium-ion batteries are set to continue on aggressive cost reduction curves, of 28 percent, 14 percent and 18 percent respectively for every doubling in global installed capacity.

Matthias Kimmel, NEO 2019 lead analyst, said: “By 2030, the energy generated or stored and dispatched by these three technologies will undercut electricity generated by existing coal and gas plants almost everywhere.”

Europe will decarbonize its grid the fastest with 92 percent of its electricity supplied by renewables in 2050.

The U.S., with its abundance of low-priced natural gas, and China, with its modern fleet of coal-fired plants, follow at a slower pace.

China sees its power sector emissions peaking in 2026, and then falling by more than half in the next 20 years. Asia’s electricity demand will more than double to 2050. At $5.8 trillion, the whole Asia Pacific region will account for almost half of all new capital spent globally to meet that rising demand.

China and India together are a $4.3 trillion investment opportunity. The U.S. will see $1.1 trillion invested in new power capacity, with renewables more than doubling its generation share, to 43 percent in 2050.

Wind and solar will be capable of reaching 80 percent of the electricity generation mix in a number of countries by mid-century, with the help of batteries, but going beyond that will be difficult and will require other technologies to play a part – with nuclear, biogas-to-power, green hydrogen-to-power and carbon capture and storage among the contenders.