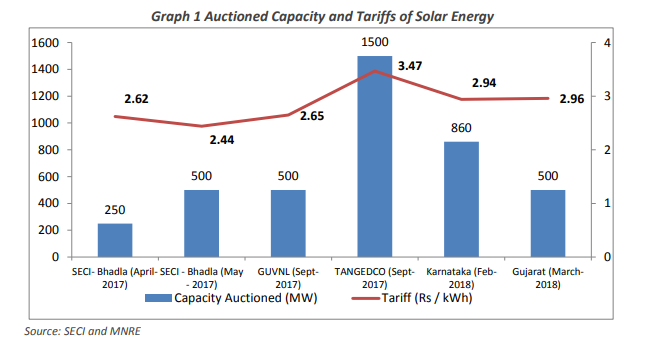 CARE Ratings’ latest update on the renewable power industry in India has revealed the following:

The fall in solar power tariffs during the previous year was in line with the fall in prices of solar power components by almost 80 percent, most of which is imported from China. Domestic manufacturers of solar equipment and modules have been demanding duties to safeguard their interests, which in turn is slowing the pace of new capacity development especially in the solar power segment, the report said.

Thermal and renewable power tariffs are at par, as per the recent renewable tariffs under various auctions and the prices of thermal power data from CEA.

The new guidelines under the National Solar Mission which aimed at bringing transparency in procurement of solar power and at the same time penalising developers or discoms in case of unilateral termination or amendment in PPAs has come as a relief for the industry at a time when low tariffs led to many state discoms pushing for renegotiation of existing PPAs with developers.

Wind energy tariffs dropped from a high of Rs. 3.46 per unit in Feb-2017 which was the first auction under reverse auction mechanism post transition from Feed-in-Tariff regime (FiT) for wind energy projects. The tariffs touched a low of Rs. 2.44 per unit during the SECI auction conducted in Feb-2018.

Tariffs inched upwards to Rs. 2.85 per unit during the latest auctions, a 16 percent increase in tariff levels from the previous auction. The rise in tariffs of wind energy can be attributed to better order visibility of 10GW each for the year 2019 and 2020 as set by the Ministry. The targeted installed capacity for wind energy by 2022 is 60GW out of which 33 GW is already in place.