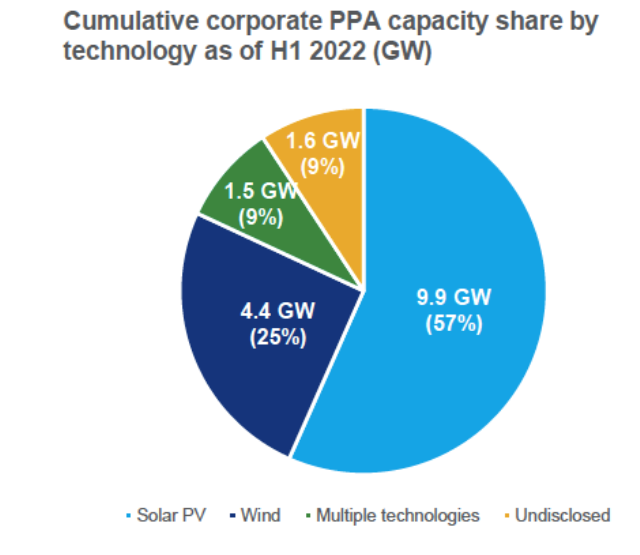 The levelised cost of electricity (LCOE) for utility-scale solar, commercial solar and onshore wind has fallen by 4.9 percent, 14.2 percent and 8.6 percent respectively since 2019. In the same period, LNG has become 2.4 times more expensive. The price of crude oil has more than doubled. And coal has become more than four times as expensive. As a result, renewable power costs are 46 percent below average industrial end-user tariffs in 2022.

Solar dominates corporate renewable procurement in Asia Pacific, accounting for 57 percent of the region’s contracted corporate PPAs to date. However, wind has been catching up since 2020 and accounted for 44 percent of new contracts in the region in the first half of 2022.

Within countries, the market share of different technologies varies considerably. Solar and wind are almost equally popular in Australia, accounting for 45 percent and 43 percent of PPA contracts respectively. In India solar dominates, accounting for 82 percent of contracts. The situation is reversed in Taiwan, where wind, particularly offshore wind, has rapidly become the dominant technology behind PPAs, making up 89 percent of total capacity. For the rest of Southeast Asia and East Asia, solar accounts for nearly all contracted capacity. 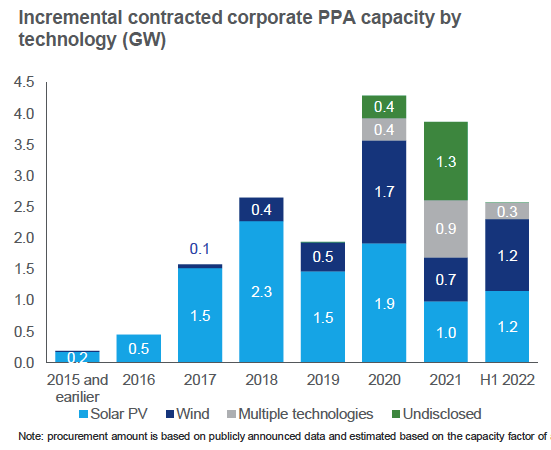 Where are corporate renewable PPAs most popular?

Countries with favourable policies towards offsite corporate energy procurement have been able to ramp up PPA projects more quickly.

India leads the charge, with 44 percent (8.1 GW) of cumulative contracted capacity. Australia and Taiwan are also seeing strong growth. These three countries together account for 89 percent of overall capacity.

In most Southeast Asian countries, including Cambodia, Thailand, Vietnam, Pakistan and the Philippines, PPAs are rooftop solar projects. These are of limited size, reducing their contribution to capacity.

Who are the big players?

Large energy users in the industrial, retail and technology sectors are the key customers for PPAs. At 2.4 GW, Taiwanese chipmaker TSMC’s PPAs account for over 10 percent of the total for the entire region. In Australia, companies including BHP and Newcrest use PPAs to power their mining operations. Other big users include supermarket chains and telecoms providers who use renewables to power their data centres.

Although Asia Pacific’s contracted renewable corporate PPA capacity was seven times higher in 2021 than in 2017, the region still accounts for only 15 percent of the global PPA market. So far, only 29 percent of the 122 Asia Pacific companies that are members of the RE100 global renewable energy initiative have signed corporate PPAs. That leaves plenty of room for further growth.

With the prices of LNG, coal and crude oil expected to remain high in the coming years, renewables are now considerably cheaper as well as greener than traditional energy sources. Where they are viable, PPAs are an easy and relatively inexpensive way for companies to access renewable power. The main barrier is a lack of regulation permitting large-scale procurement of renewables in some jurisdictions to drive growth.

Countries including South Korea, Japan, and China are all gradually easing regulations surrounding offsite corporate PPAs, which should open up opportunities in the coming years. However, we expect Australia, India, and Taiwan to continue to lead future growth.