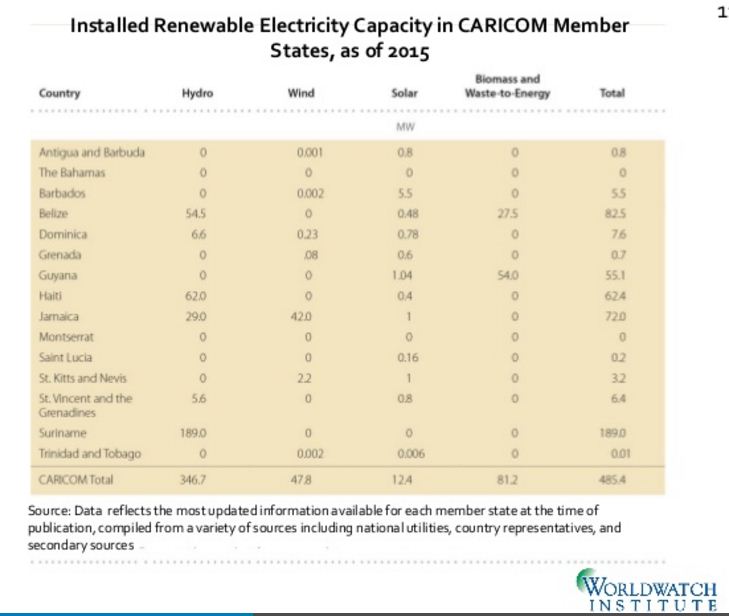 Achieving these sustainable energy goals would result in a 46 percent decrease in carbon dioxide emissions over the period, the report said.

Caribbean governments are increasingly aware of the enormous financial, environmental, and social costs associated with continued dependence on fossil fuels. 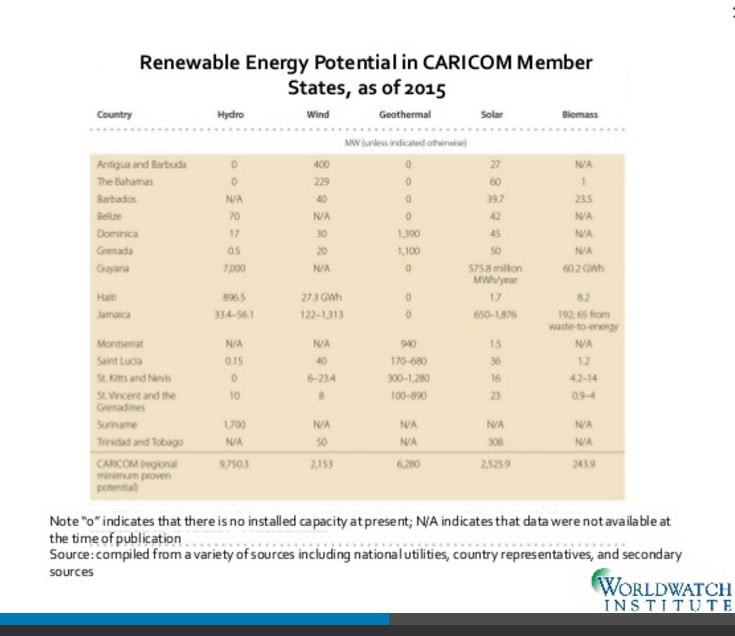 Only one CARICOM Member State, Trinidad and Tobago, has substantial fossil fuel resources of its own. All others spend sizable shares of their gross domestic product-including at least a quarter of GDP in Guyana and Montserrat-on imported petroleum products. In Jamaica, the cost of electricity is four times that in the United States. And in Haiti and Suriname, large portions of the population still lack access to modern energy services.

“A month before the milestone United Nations climate summit in Paris, and on the day of the launch of the Caribbean Center for Renewable Energy and Energy Efficiency, this report leads the way for CARICOM and its Member States to become global sustainable energy leaders,” says Alexander Ochs, Director of Climate and Energy at Worldwatch and lead author of the report.

“We were extremely excited two years ago when CARICOM Member States reviewed an early draft of this report at a Meeting of Energy Ministers and agreed on the preliminary goal of a 48% renewable electricity share,” Ochs added.

CARICOM has aimed to provide guidance and support for Member States that are willing to transition to more sustainable energy systems. In 2013, CARICOM formed the first region-wide agreement on joint energy goals— that included the preliminary 48 percent renewables target. This commitment has since been lauded by UN Secretary General Ban Ki­-Moon.

“C-SERMS is pivotal to the attainment of the sustainable energy and development goals of the Caribbean Community. CARICOM envisions that implementing the C-SERMS Baseline Report and Assessment advances regional goals whilst simultaneously supporting Member States,” says Devon Gardner, program manager for Energy in the CARICOM Secretariat and Head of the CARICOM Energy Unit.