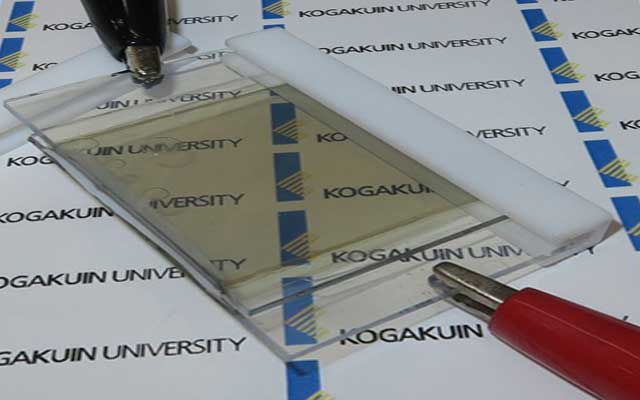 A research team in Japan has unveiled a prototype translucent lithium-ion (Li-ion) rechargeable battery. The device is able to recharge itself when exposed to sunlight.

Future applications of the technology could include smart windows which can function both as large-area rechargeable batteries and as photovoltaic cells.

The group led by Mitsunobu Sato, president of Kogakuin University and professor at the Department of Applied Physics, School of Advanced Engineering of the university exhibited the battery recently at Innovation Japan 2015, a trade show in Tokyo.

The researchers had announced the development of the battery in a thesis in 2013.

According to a Nikkei Technology report, the key component of the electrolyte used for the positive electrode of the battery is Li3Fe2(PO4)3 (LFP).

And main components of the electrolyte used for the negative electrode are Li4Ti5O12 (LTO) and LiPF6 (lithium hexafluorophosphate).

The researchers have kept the thicknesses of the positive and negative electrodes at 80nm and 90nm, respectively, leading to high light transmittance.

The output voltage of the battery is about 3.6V. And the research group confirmed 20 charge-discharge cycles.

At the trade show, the team repeated five cycles of optical charge and discharge by applying near-ultraviolet light with an output of 10mW/cm2, which is about 1/10 that of sunlight, the report states.