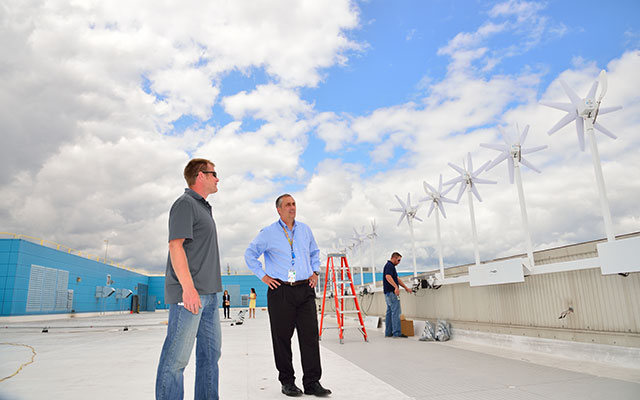 US-based multinational technology company Intel has installed wind-operated micro-turbines at its headquarters in Silicon Valley as part of a feasibility study.

The company has deployed 58 Zefr micro-turbines manufactured by JLM Energy on the roof of the Robert Noyce building at Santa Clara.

Besides generating power for the building, the project is also expected to give Intel a clear understanding of the feasibility of small-scale wind turbines for power generation.

The company has stated that it will be sharing the data extracted from the turbines with companies in the region to enhance green energy adoption therein.

According to Intel, the turbines, which stand six- to seven-feet tall, generate power 65 percent of the time, particularly during the “often-breezy afternoon hours”.

Brian Krzanich, the CEO of Intel, said: “We want people to see this and know that we’re thinking about new ways to do things.”

Intel has completed more than 2,300 energy conservation projects utilizing an investment of $118 million since 2008. Cumulatively, the projects have led to savings of $249 million in energy costs till the end of last year, the company has stated.

In January 2008, the US chipmaker had committed to purchase more than 1.3 billion kilowatt hours a year of renewable energy certificates. It was one of the measures the company initiated as part of its multi-faceted approach to reduce its impact on the environment.

The commitment then had made Intel the single-largest corporate purchaser of green power in the United States based on the assessment of US Environmental Protection Agency (EPA).

According to an estimate EPA provided Intel’s REC purchase had an environmental impact equivalent of removing more than 185,000 passenger cars off the road each year. Alternatively, that equated to cutting power required by 130,000 average American homes annually.

In 2006 EPA had recognized Intel as the most commute-friendly employer in the US.