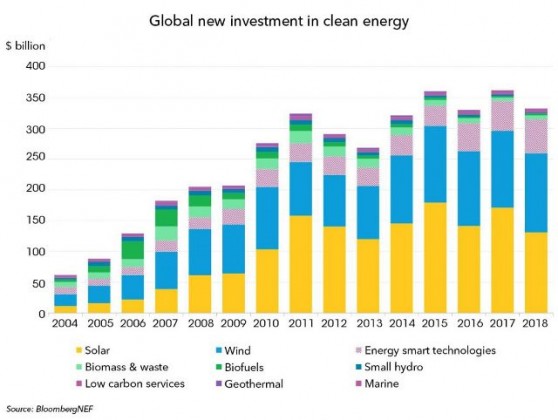 Global clean energy investment dropped 8 percent to $332 billion in 2018, according to the latest research report from BloombergNEF.

Wind investment grew 3 percent to $128.6 billion, with offshore wind having its second-highest year.

BNEF’s global benchmark for the cost of installing a megawatt of photovoltaic capacity fell 12 percent in 2018 as manufacturers slashed selling prices in the face of a glut of PV modules on the world market.
Global PV installations increased from 99GW in 2017 to approximately 109GW in 2018.

Jenny Chase, head of solar analysis at BNEF, said: “2018 was a difficult year for many solar manufacturers, and for developers in China.”

The biggest solar projects financed included 800MW NOORm Midelt PV and solar thermal portfolio in Morocco, at an estimated $2.4 billion, and the 709MW NLC Tangedco PV plant in India, at a cost of about $500 million. India is one of the countries with the lowest capital costs per megawatt for photovoltaic plants.

Offshore wind attracted $25.7 billion (+14 percent) clean energy investment last year. Some of the projects financed were in Europe, led by the 950MW Moray Firth East array in the North Sea, at an estimated $3.3 billion, but there were also 13 Chinese offshore wind farms starting construction, for a total of some $11.4 billion.

David Hostert, head of wind analysis at BNEF, said: “China is taking over as the biggest market and new locations such as Taiwan and the U.S. East Coast are seeing strong interest from developers.”

Onshore wind saw $100.8 billion of new asset finance globally last year, up 2 percent, with the biggest projects reaching go-ahead including the 706MW Enel Green Power South Africa portfolio, at an estimated $1.4 billion, and the Xcel Rush Creek installation in the U.S., at $1 billion for 600MW.

Global venture capital and private equity investment jumped 127 percent to $9.2 billion, the highest since 2010. The biggest deals were $1.1 billion of expansion capital for U.S. smart window maker View, and $795 million for Chinese electric vehicle firm Youxia Motors. In fact, there were no fewer than eight VC/PE financings of Chinese EV specialist companies in 2018, totaling some $3.3 billion.