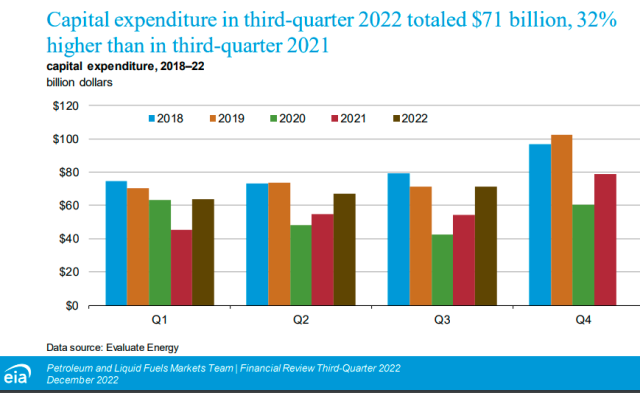 U.S. Energy Information Administration (EIA) has released the latest report on the performance of 160 energy companies for the third-quarter 2022.

Distributions to shareholders via dividends and share repurchases reached $60 billion as a four-quarter average ending in 3Q22, the highest in the 2017–22 period.

The long-term debt-to-equity ratio decreased to 38 percent, the lowest in the 2017–22 period.

Upstream capital expenditures per barrel of oil equivalent were 13 percent of crude oil prices in third-quarter 2022.

Net losses from hedging derivatives were $3.4 billion in third-quarter 2022.

The return on equity for the energy companies remained higher than U.S. manufacturing companies’ returns in third-quarter 2022.

Petroleum liquid production in the third quarter was below the 2019 quarterly average, and natural gas production remained above average.