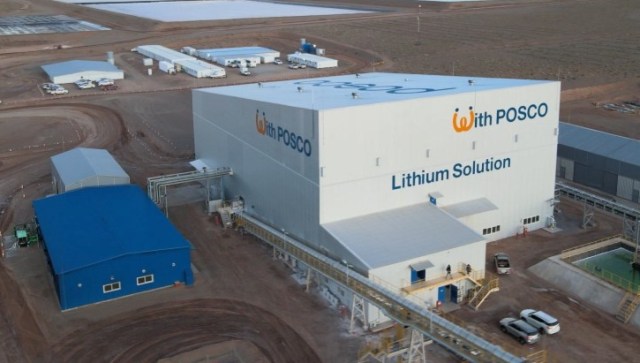 South Korean steelmaker Posco said it will invest $4 billion in a new lithium mining project in Argentina, as the company seeks to tap into soaring demand for the key rechargeable battery metal.

The funds will be invested in a project at a salt flat called Salar de Hombre Muerto, located in the border between the northern Salta and Catamarca provinces.

Posco expects to initially produce 25,000 tonnes of lithium hydroxide, an especially high-demand lithium product for battery makers, there per year, reaching 100,000 tonnes once the venture is completed.

Export value from the project is seen totaling $260 million per year over the next 30 years, according to a statement from President Alberto Fernandez’s office.

Argentina is part of the lithium triangle, which also includes neighbors Bolivia and Chile, home to one of the world’s largest lithium reserves.

Posco was initially expected to invest U$830 million (about 1 trillion KRW), in the venture, but changes in the original project led it to increase the amount, according to Salta’s mining department.

The 25,000 tons of lithium hydroxide that POSCO Group will produce annually with the start of operations are sufficient to supply about 600,000 electric vehicles. When production is expanded to a maximum of 100,000 tons, this volume can fulfill demand for about 2.4 million electric vehicles.

POSCO Group plans to become one of the top 3 global companies in lithium production by 2030 based on the brine, hard rock, and recycling of waste batteries at the group level including POSCO Argentina, POSCO Lithium Solution, and POSCO HY Clean Metal, centered on the parent company, POSCO Holdings.