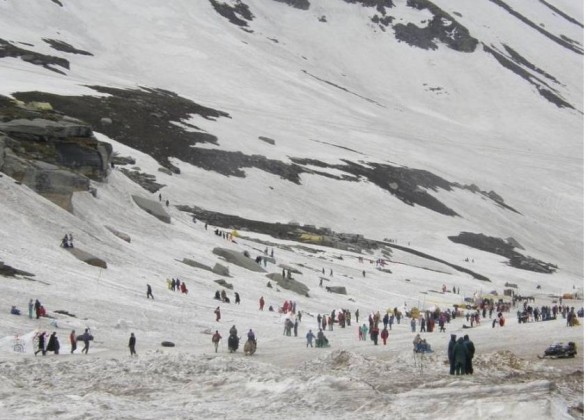 He has since his childhood seen the ecological degradation of the Rohtang Pass in Himachal Pradesh — which remains snowbound for over six months of the year — owing to increasing exhaust fumes of vehicles and trash left behind by tourists.

And when he became the Chairperson of the National Green Tribunal (NGT), Justice Swatanter Kumar refused to close his eyes. He took one of the toughest decisions of curtailing commercial tourism activities to save the glaciers and fragile native flora and fauna from extinction.

Kumar, the first Supreme Court judge to preside over the tribunal, says limiting passing of vehicles over the Rohtang Pass, located at an altitude of 13,050 feet some 52 km from Manali, to merely 1,200 (800 petrol and 400 diesel) from an average 10,000 per day, would certainly help save the 23 Himalayan glaciers ringed around it.

“There used to be a dense forest canopy in Ralha where even sunlight didn’t penetrate. Today you can straight away look at the sun, there is no tree. Where have the trees gone, nobody knows,” Kumar, who is visiting the Rohtang Pass since his childhood, told IANS in an interview.

Without mincing words, he added: “It’s a manmade disaster.”

Ralha is near picturesque tourist resort Kothi, some 15 km from Manali towards the Rohtang Pass, which is located in the Pir Panjal range of the Himalayas.

The “green” judge said even the temperature of Manali has changed a lot and the intensity of rains lessened.

“When I visited the area, I was shocked to see the excessive emission of carbon monoxide from the vehicles and huge quantities of trash left behind by tourists at Rohtang Pass, which are taking a heavy toll on the snow cover,” he said.

Kumar said scientific studies clearly indicate that glaciers in the Rohtang Pass catchment are receding at a rate of one metre per year.

At several points, he said, the snow is turning black and the rocks along the pass have turned black due to soot accumulation.

“Everyone going for picnic carries coke, popcorns and beer bottles with them and then dumps these haphazardly there (at Rohtang Pass). There is plastic trash and human waste. The mule dung is polluting water and soil. This is the case before us,” he said.

Saying candidly that it is the biggest challenge in his career to take the case to the logical conclusion, as there is opposition from the local cab operators, stakeholders and, of course, political pressure.

“But finally, it’s because of the local people’s support and government’s interventions that things have started looking up. The government is now planning to set up a ropeway to take the tourists to the pass. This will certainly help curb environmental pollution,” said Kumar, who is retiring this year.

According to him, the state’s Forest Department has also planted saplings to make the Ralha falls area green again.

Kumar took over as the NGT Chairperson in December 2012 to decide on cases relating to environmental protection and conservation of forests and natural resources.

The judge, known for levying green cess on polluting trucks entering Delhi to banning registration of new diesel vehicles in the national capital, doesn’t hesitate slamming the central and the state governments, local civic bodies and stakeholders for failing to curb pollution.

Advocating sustainable development, Kumar, who was in Chandigarh on January 28 to attend an environment workshop, said: “You can make roads and development projects wherever they are necessary. But don’t damage nature up to that extent which is irreversible.”

Citing a case, Shimla-born Kumar said just to protect 10 chir pine trees from axing, the British had deviated the route on the Kalka-Shimla rail track by constructing a tunnel.

“These 10 saved trees exist even today.”

“Environment awareness is inbuilt. We worship rivers but the unfortunate part is that they are most polluted. The municipal waste is one of the prominent health hazards in India,” he said.

Favouring the judiciary to take an activist’s role to ensure environmental crimes do not go unpunished, Kumar said: “The courts must do judicial activism, but not judicial overreach.”

He said the green tribunal is being looked upon in a different way internationally, instead of just a body adjudicating disputes.

“I will personally visit the Rohtang Pass before my retirement (this year) to see that measures are taken to protect the eco-sensitive zone,” he added.

The picturesque Rohtang Pass is a major attraction for both domestic and foreign tourists.

According to a journal of the Asiatic Society, Lieutenants A. Broome and A. Cunningham trekked to the Rohtang Pass on July 7, 1839, to trace the sources of the Punjab’s rivers.

“The heat and glare reflected from the snow (on Rohtang Pass) were intolerable, and our faces were completely blistered,” they wrote.