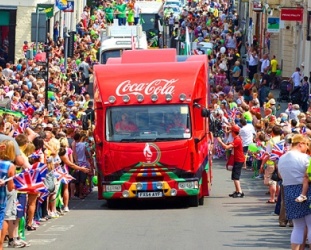 A single car-free day in Delhi is a good gesture, but mere tokenism will not work, environmentalists feel. Simply keeping cars off roads for half a day won’t matter in the fight against pollution – but stopping trucks and diesel vehicles would.

“Taking into consideration the emission numbers, a car-free day really would not make much of a difference to Delhi,” Kushagra Nandan, CEO of SunSource Energy, an organisation which works globally for sustainable development, environment and tapping of solar energy, told IANS, adding it was certainly a symbolic start.

Apart from its 7.35 million vehicles – the highest for any Indian city – and 1,400 new vehicles getting added every day, some 39,000 commercial vehicles (buses, trucks, private goods carriers), mostly diesel run, enter Delhi every day from nine locations, adding substantially to the already noxious mix that we breathe, a Centre for Science and Environment (CSE) study says.

“Without any restraint on the movement of these trucks, Delhi’s battle against toxic pollution cannot be won. Though light goods vehicles make up for 49 percent of all commercial vehicles, the relative contribution of heavy trucks is much higher,” CSE Director General Sunita Narain said in the study.

The debate also comes at a time when the Supreme Court indicated that it will impose an environment compensatory charge (ECC) ranging from Rs.700 to Rs.1,300 on commercial vehicles transiting Delhi for their onward journey.

Environmentalists say this will not be a complete solution to the problem but will certainly deter commercial trucks from entering the city.

According to the “Emission Factor development for Indian Vehicles” study by the Automotive Research Association of India in 2008, the emission by a truck or a diesel bus could produce nitrous oxide gases as high as 15.25 units, as compared to a petrol-run car that produces only 0.21 units.

The national capital is also infamous for having the worst quality of air in the world, according to a World Health Organisation report, but the decision on a Car-free Day on October 22 to fight pollution looks like it has been reduced to a mere power tussle.

That the car-free day coincided with Dusshera, when scores of vehicles head for the Yamuna ghats for the immersion of Durga idols, apart from revellers out to watch Ravana effigies being burnt, only promised to make matters more difficult.

Thereafter, Delhi Transport Minister Gopal Rai stepped in and permission was granted after the government agreed to observe it from 7 a.m. to 12 noon on the original stretch from the Red Fort to India Gate running through ITO – the arterial Netaji Subhas Marg, Bahadur Shah Zafar Marg, and Tilak Marg – also among the busiest stretches on a working day but not so on the first half of a holiday.

Vikrant Tongad, environmentalist working with Delhi-based Social Action for Forest and Environment, said: “The role that trucks play in bringing drinking water, fruits and vegetables from outskirts to the city play a crucial role to the adding pollution.”

The problem is more complicated as large quantities of food essentials are also transported through trucks, he added.

Experts also say there is a huge need for checking diesel-run vehicles, which contribute to a higher percentage of particulate matter polluting Delhi’s air. And the National Green Tribunal has also demanded that vehicles older than 15 years be scrapped.

According to another air-quality expert and environmental activist Kamal Meattle, a car-free day every month would have a positive impact.

For 28-year-old technology professional Ritika Mehta, effective use of social media and websites to schedule car-pooling slots has done the trick and saved her from expensive fuel bills.

“I notice a lot of people working at the same offices, living in nearby areas, drive their cars all alone. That adds up to jams and even pollution. One way to solve this is by pooling with others,” Mehta said.

How renewable energy sector performed in India in 2015

Budget for solar energy via rooftop hiked to Rs 5,000 crore