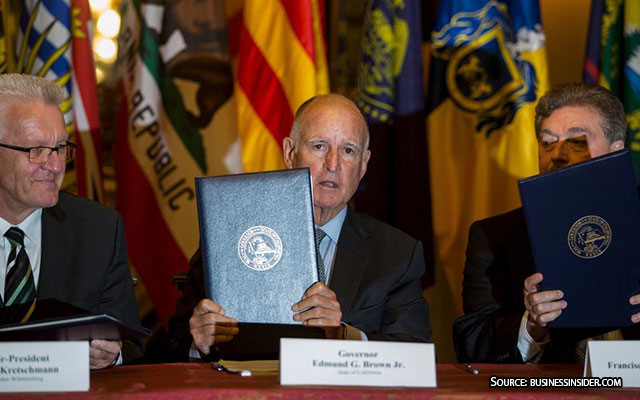 The US state California has signed an agreement with leaders of 11 other states aimed at reducing carbon emissions. The state signed agreements with provinces or states in other countries as well on Tuesday.

Governor of California Edmund Gerald “Jerry” Brown Jr. called for “bold action on the part of governments everywhere” to fight the global challenge of climate change. “It’s time to be decisive. It’s time to act,” Los Angeles Times quoted him from a statement.

The agreement is seen as a build up toward the global climate summit in Paris scheduled for later this year.

Oregon, Washington and Vermont were among the states that became signatories to the agreement, LA Times has reported. The provinces of British Columbia and Ontario in Canada, the states of Baja California and Jalisco in Mexico, and the British country of Wales, besides states or provinces in Brazil, Germany and Spain also inked the pact.

California also plans to draw more states into the fold.

The agreement, although not legally binding, has drawn specific commitments from the leaders for reducing greenhouse gas emissions by 2050.

The level currently set for the signatories is 80 percent below the levels that existed in 1990, which, in other terms, means reducing emissions to less than 2 metric tons per head annually.

Former governor of California Arnold Schwarzenegger had already set California an emissions-cut target. Brown has taken the effort forward by setting the state an interim goal for 2030.

The governor has been working to position California as a pacesetter in the fight against climate change and will be participating in the Paris summit.

Robert Weisenmiller, the head of the California Energy Commission, expressed hope at at Tuesday’s event that the agreement can influence conversations in Paris toward more aggressive action.

“We’ve been able to demonstrate that it’s possible to grow the economy and have cleaner air,” he said. “We can stand as that marker for the world … that these policies can work.”