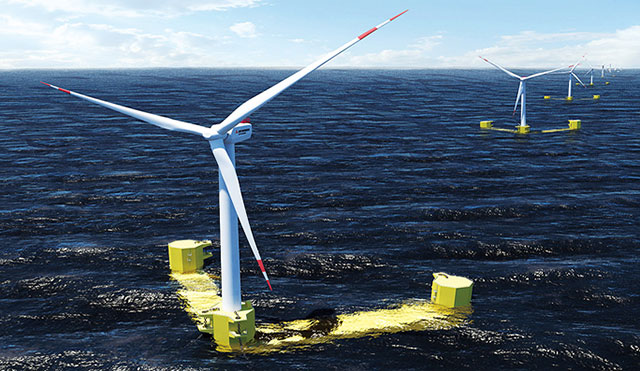 Considering that point, it is no surprise that offshore floating wind farms are increasing in number. A floating wind turbine offers a host of advantages over its conventional cousins to the producers.

There is a consistent flow of forceful winds further offshore than the 30–40 meter depth close to shore at which conventional, or fixed, offshore wind farms are erected. Floating wind turbines are installed out in the ocean where the depth ranges between 500 and 600 meters. Of course, one big advantage they offer visitors to the coast is that they don’t cause visual pollution.

With top quality onshore sites for wind power generation shrinking the ocean offers the perfect alternative without space constraints. Also, the floating farms provide the unique option of mobility if so required. It should be cheaper to shift these turbines compared with fixed ones.

It is no doubt the advantages these devices are offering that’s attracting greater investment in such installations from big wind energy players. Several companies in Europe and America see such wind farms as the energy future.

Siemens, MRI-Vestas and Dong Energy are some key players in the offshore wind power industry. In another five years they are likely to come up with more powerful, efficient turbines that could improve wind power capacity of offshore farms significantly.

Turbines of the future could generate 6 to 8MW power and the transformers that serve them will shrink. Saving on production and installation costs is expected to rise.

In a recent study Ernst & Young predicted that the European offshore wind market could offer power at prices comparable with traditional gas and coal markets if it sheds 26 percent of outlays by 2023.

The industry, in turn, believes such a scenario would arrive by 2020. “Going forward, you will see the industry can live with a declining subsidy, and then, between 2020 and 2030, we will reach grid parity,” Michael Hannibal, head of the offshore unit at Siemens Wind Power said at the European Wind Energy Association Offshore 2015 conference.

One indicator of the growing demand for offshore installations is that last year, Siemens, the world leader in offshore wind, shipped more than 300 turbines from its assembling unit at Esbjerg on Denmark’s north coast. The unit assembles components such as towers and hubs to prepare them for installation with jack-up vessels. And, Siemens has an order backlog of 1,100 wind turbines.

But analysts believe the one key development that could accelerate the growth of the sector would be Seimens new alternating-current grid access solution. It would replace large intermediary substations with lighter versions.

In some cases the new device would be “small enough to be installed like a balcony between the foundation and turbine shaft”, reports suggest. These could reduce production costs by up to 40 percent.

It shouldn’t be a surprise then that a lot of power we use in a few years from now would come from far out in the sea.

Winners of offshore wind auction in California to spend $757 mn