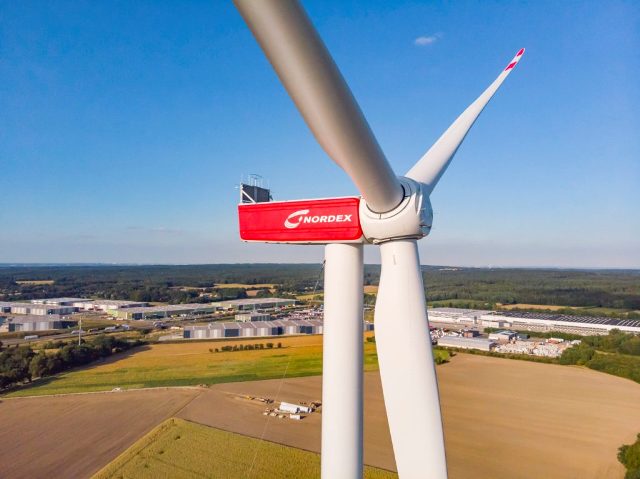 Nordex Group has optimized the aerodynamics of the rotor blades of a total of 80 N100/2500 wind turbines for the Turkish customer, Eksim.

The power output of the older generation turbines will be increased by up to 2 percent by installing the vortex generators.

Nordex Group offers the vortex generator upgrade as an additional option for the N100 turbines from the company’s Gamma Generation with blades that were not previously equipped with this solution.

The devices are installed on the top side of the blade. The result is an increase of the annual energy production of the turbines due to the optimization of the aerodynamics at the base of the rotor blades. The project comprising five wind farms in Turkey is the Nordex Group’s largest vortex generator upgrade project to date.

Nordex Group worked with Eksim as early as the product development phase: As part of a pilot project, rotor blades of six N100/2500 wind turbines at the Susurluk wind farm in Turkey were already equipped with vortex generators in 2016. This blade performance enhancing upgrade has demonstrably increased the annual energy production of this wind farm by 2 per cent.

“With this project of installing vortex generators to the blades of our N100 Gamma turbines, the aim was to increase energy output and it was decided, to implement the project in five different wind parks to 80 wind turbines,” said Sabahattin ER, general manager of Eskim Investment Holding.

Nordex Group develops upgrades for its legacy fleet using the latest technologies from newer turbine generations. Rotor blades of the Group’s turbines of the Delta and Delta4000 Generation are serially equipped with Vortex generators.

Nordex Group generated consolidated sales of EUR 3.2 billion in the first nine months of 2020 against EUR 1.9 billion in 9 months of 2019. This sales growth is mainly attributable to the significant increase in installation and production in the “Projects” segment.

Nordex to supply turbines for 50 MW capacity to Pakistani IPP