The region has contributed around 60 percent of capacity additions since 2013; had 42 percent of global capacity in 2017; and accounted for 40 percent, 40 percent, and 54 percent of the global market share for hydropower, wind power and solar power by installed capacity, respectively.

China has been the largest renewable power developer over the past eight years, with 67 percent of Asian renewable power capacity as of end-2017. The country’s large power consumption base, supportive government policies, and successful and long history of large-scale hydropower development, are among the major drivers behind this rapid growth.

India followed with a 12 percent renewable capacity share in Asia, and is growing fast thanks to strong wind and solar resources endowment and strong government promotion. 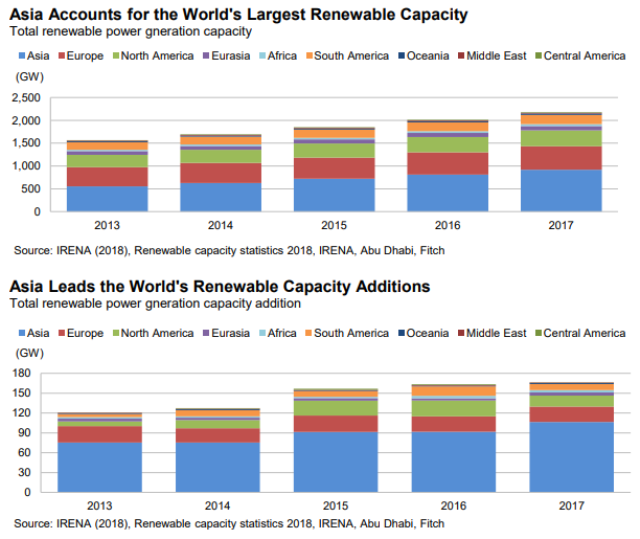 Hydropower accounts for half of Asian renewable capacity but growth has slowed due to the lack of economically feasible sites, and rising environmental and social concerns.

Wind power has also seen capacity additions falling to 20GW in 2017 from 38GW in 2015, due to tariff cuts and grid-curtailment issues in China and falling tariffs in India.

Asia added a record amount of 72GW solar capacity in 2017, but new addition is likely to wane in 2018 amid China’s new policy to curb industry overheating and reduce subsidy burden.

Many Asian governments have made renewable development a key energy policy target as they face the challenge of rising power demand and environmental concerns. Energy self-sufficiency is another reason for some hydrocarbon resource-lacking countries to promote renewables. These trends, together with improving grid readiness, will support continued growth of renewables’ share in Asia’s energy mix, although coal will stay as the dominant energy source in the next five to 10 years.

Most Asian countries rely on feed-in-tariff (FiT) as the major scheme to promote renewables, which aims to guarantee power producers adequate returns through long-term fixed tariffs or premiums to market tariffs. As renewables approach grid-parity, a move towards more market-driven practices to reduce subsidy requirements is evident. Changes include FiT cuts, adoption of auctions, and promotion of direct sales to users.

This suggests greater price and volume risk for new projects, which may lower some developers’ incentive to invest. An increasing proportion of electricity sold through direct sales may lead to lower weighted average tariffs and shorten the duration of power-purchase contracts. Counterparty risks may also rise, although the impact is likely to be limited in the near-term as generators still have the option to select high-quality customers.

Rapid capacity additions helped Asia to expand its renewable share in primary energy from around 5 percent in 2000 to 10 percent in 2017, behind the European Union at 13 percent and Central and South America at 28 percent but on a par with North America’s 10 percent.

China has been the biggest renewable power developer in the world over the past eight years, with 67 percent of Asian renewable power capacity and 28 percent of global capacity as of end-2017. A large and growing power consumption base, supportive government policies, a successful record of hydropower development, rich wind and solar resources, and a large upstream renewable equipment manufacturing industry have been key factors supporting growth.

India has one of the lowest solar and wind generation costs globally thanks to excellent resources endowment, as well as low land, installation, operating and maintenance costs. The benchmark levelised costs of electricity (LCOEs) for Indian onshore wind and photovoltaics system (PV) stood at USD39/MWh and USD41/MWh in 1H18, lower than USD68/MWh for local coal-fired generation. By comparison, the global LCOE for onshore wind and solar PV projects were USD55/MWh and USD70/MWh, 41 percent and 71 percent higher than those in India, respectively, according to Bloomberg New Energy Finance (BNEF).

Japan has the third-largest renewable capacity share in Asia at 9 percent. The country has accelerated renewable power development since the Fukushima nuclear disaster in 2011 to expand the utilisation of indigenous energy sources.

Wind power is the second-largest renewable power source in Asia, but its capacity of 204GW in 2017 is less than half that of hydropower.

The top-three countries – China, India and Japan – account for nearly all of the capacity within Asia.

China leads with around 80 percent of the Asian wind capacity share due to its generous tariff policy and early-mover advantage, followed by India’s 16 percent and Japan’s 2 percent, according IRENA’s statistics.

Asian wind power capacity had grown rapidly at a CAGR of 24 percent between 2010 and 2017, but the annual capacity addition had slowed from the peak of 38GW in 2015 to around 20GW in 2017, due mainly to FiT cuts and grid-curtailment issues in China.

China has introduced policies to lower curtailment rates since 2H16 which appear to be effective. These policies include restriction on capacity addition in high-curtailment-risk regions, continued investment in grid infrastructure, and the introduction of minimum guaranteed annual utilisation in 2016.

Ninety-nine percent of Asia’s installed wind power capacity is onshore, due to historically better economics and more mature technology. Asian onshore windfarms on average had LCOE at the lower end of the fossil fuel cost range in 2016, according to IRENA.

Asian countries are latecomers to the solar industry but have been boosting capacity aggressively as solar installation costs fall. Asia has seen its global solar power capacity share more than double to 54 percent in 2017 from 25 percent in 2013.

India posted the highest growth rate and doubled its solar capacity in 2017. China also saw an installation rush, with a 68 percent capacity growth in 2017 ahead of the planned cuts to FiT for new projects. However, China’s solar capacity expansion will slow down sharply in 2018 due to the government’s recent announcement to halt the allocation of installation quotas for new utilityscale projects until further notice and to lower the FiT by CNY0.05/kWh.

China leads with an around 60 percent capacity share of solar, followed by Japan’s 23 percent and India’s 9 percent. Asian solar farms have the lowest LCOE versus other regions, but solar power tariffs are still higher than that for coal-fired power except for projects in India, where the competitive auction scheme has driven solar tariffs down rapidly – in certain cases to unhealthy levels despite project costs falling significantly. China and Japan have also started to adopt a competitive tariff-bidding mechanism in addition to the FiT scheme, which is likely to drive tariffs lower, possibly hurting developers’ returns