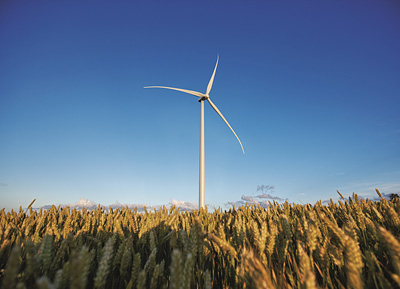 The new wind turbine model is ideal to the wind conditions in Germany and throughout Europe, the company said.

With its rotor measuring 130 meters in diameter, Siemens wind turbine has the capacity to deliver 3.3 MW of electric power from low to moderate wind velocities.

The giant wind turbine units will be available in early 2017.

The new wind turbine comes with direct-drive PMG generator that operates with even stronger permanent magnets to further enhance output.

The designs of the nacelle bedplate, yaw drive and other components important to unit statics have been strengthened to accommodate the new 130-meter-long rotor.

The SWT-3.3-130 uses B63 blades measuring 63 meters in length. They limit the static loading of the nacelle and tower, particularly under turbulent wind conditions, as the blade ends act to cushion and absorb high wind pressure.

Further innovations featured in the SWT-3.3-130 include a newly designed cooling system that has now been integrated into the nacelle and ensures optimum cooling of the generator and other electrical components.