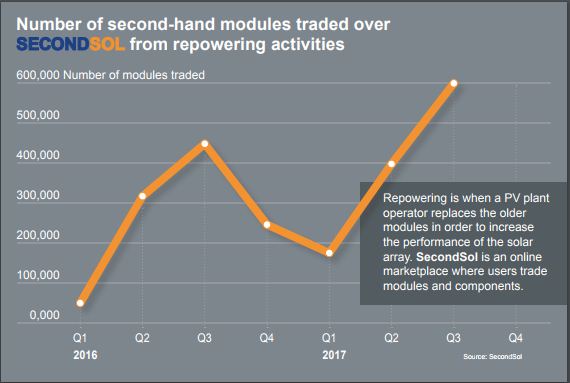 The use of second-hand photovoltaic (PV) systems has risen sharply in Europe in 2017, says a report from SecondSol, an online marketplace for photovoltaic products and services.

Second-hand module trading at SecondSol increased by 30% in the third quarter of 2017 compared to the previous year. Although the cold winter months significantly reduced activity, a general upward trend in repowering is clearly evident.

With an installation capacity of more than 42 gigawatts at the end of 2017, Germany has a large number of installed roof-mounted and ground-mounted systems. As they age, however, the performance of these systems decreases. By replacing the older modules with more powerful ones, the performance of the entire plant is significantly increased, which improves the yield for the owner and investor.

“The repowering market is still in an early stage, but it is currently at a turning point. It will continue to increase,” said SecondSol managing director Frank Fiedler. . “With more than 11,000 users and 1,000 installers, dealers and developers looking for PV products on SecondSol every day, the platform has quickly developed into the go-to place for used modules.”