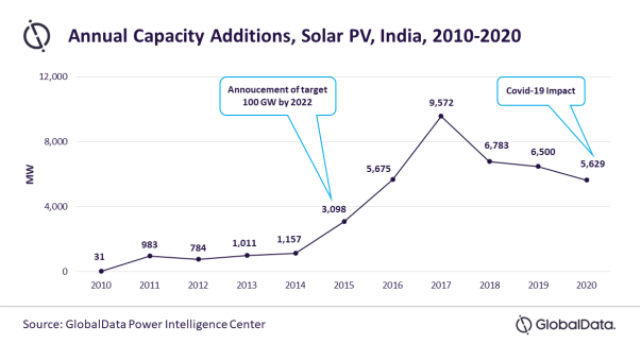 India has set a target of 500 GW of renewable energy capacity by 2030 before reaching zero carbon emissions by 2070.

Within renewable energy, a target of 280 GW of solar PV by 2030 has been included. In its latest annual budget, India has announced an additional allocation of $2.6bn to the production linked incentive (PLI) scheme to promote and push the domestic PV module manufacturing, according to GlobalData.

India is the third biggest emitter of greenhouse gases after China and the US. To reduce this, India has been pushing for renewable energy development especially solar sector.

“India’s solar sector is dependent on the imports of solar equipment. The COVID-19 pandemic disrupted the supply chain as solar equipment could not be imported affecting the solar PV capacity additions,” Mohit Prasad, Practice Head of Power at GlobalData, said.

“The imports of components used in the solar industry increased substantially since the launch of the government’s ambitious solar policy – the ‘Jawaharlal Nehru National Solar Mission’. The mission had set the target of deploying 100 GW of grid connected solar power by 2022.”

India witnessed a sudden spurt in its annual solar PV installations in 2015 when 3 GW of new solar installations were added to the grid which used to be around 1 GW in previous years.

However, the subsequent two years witnessed new highs in the annual installations which were driven primarily by solar components’ imports from countries like China, Malaysia etc. at a lower cost. This caused many domestic producers to stop their production, resulting in heavy losses thereby crippling the domestic industry.

India Government introduced the PLI scheme for solar components in April, 2021 by allocating $603 million to provide impetus to domestic manufacturing of solar PV components. The effect of PLI can be witnessed since India has already added more than 11 GW from January-November’ 2021.

As India has set a net-zero climate target by 2070, investment in renewable energy is required. This can be addressed if there are policies to promote investments in the sector. With a target of 280 GW for solar PV by 2030, India not only should rely on imports but must also promote domestic manufacturing sector.

The PLI scheme will play an important role in shaping up the domestic solar manufacturing industry and will try to push the sector to achieve the achieve the 2030 target.