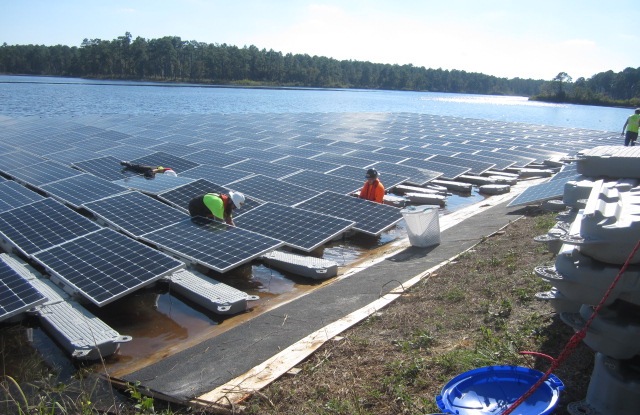 The 1.1-megawatt solar facility is part of a $36 million contract that focused on energy resilience and security at Fort Bragg, including infrastructure modernization, lighting and water upgrades, heating, ventilation and air-conditioning, and boiler system improvements.

The floating solar system was built on the Big Muddy Lake located at Camp Mackall. Fort Bragg will own and operate the solar system.

“We will be able to provide energy resiliency to Fort Bragg operations through sustainable resources. With this partnership, Fort Bragg not only has renewable electricity, but energy security that will be critical with continuing the installation’s mission during a power outage,” said Col. Scott Pence, garrison commander for Fort Bragg.

“The opportunity to implement this innovative use of clean energy technology for a military base as notable as Fort Bragg was one that our Federal Solutions team was thrilled to lead on,” said Nicole Bulgarino, Ameresco executive vice president and general manager of Federal Solutions.

The floating solar installation is being paired with a 2-MW battery energy storage system. The system will supply power to Fort Bragg from the local grid and provide power during electric service outages.

Floating solar is expected to grow quickly over the next decade. Currently, only 2 percent of new solar installations are on water.

North Carolina and Duke Energy are leaders in solar energy. The state is fourth in the nation for overall solar power capacity. Duke Energy owns and operates more than 40 solar facilities in North Carolina – one of which is a 13-MW facility at the Marine Corps Base Camp Lejeune in Onslow County.