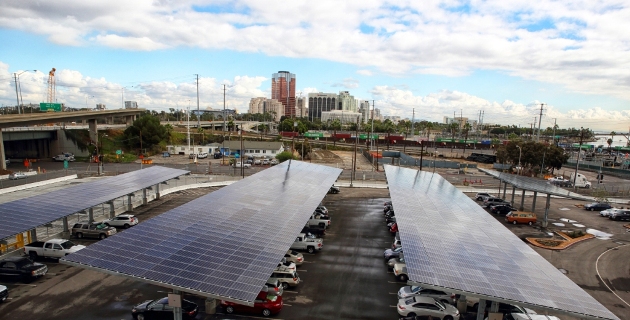 The Port of Long Beach has installed 904.75kW Mitsubishi Electric photovoltaic (PV) system at the second-busiest seaport in the United States.

The system includes 3,290 Mitsubishi Electric solar modules and has the potential to generate approximately 1,547MWh of energy per year. Annually, the system is expected to prevent 1,127 tons of carbon dioxide from polluting the environment.

The PV system, installed by Rosendin Electric and developed by PFMG Solar, is built on the roof of 12 carport structures at two sites at the Port of Long Beach terminal E. Long Beach Container Terminal (LBCT), a subsidiary of Orient Overseas Container Line (OOCL), operates the terminal.

LBCT has purchased the electricity generated by the system through a 25-year power purchase agreement with SoCore Energy/Edison Energy.

As part of the LBCT Pier E redevelopment project, the PV system will contribute to making LBCT one of the greenest, most technologically advanced container terminals in the world.

“With the aggressive environmental measures mandated by the Green Port Policy, the Port of Long Beach is a model for ports around the world. This new solar system at LBCT terminal E helps us become the first near-zero-emission container terminal on the planet,” said Anthony Otto, president of Long Beach Container Terminal.