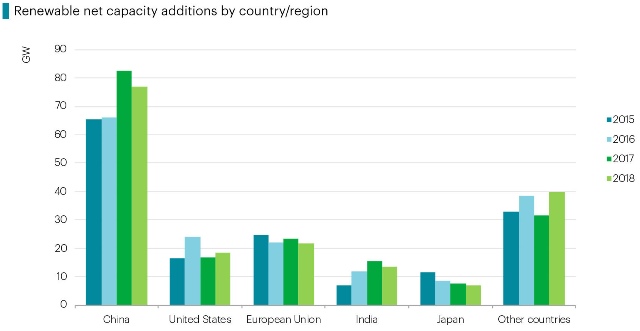 Renewable energy capacity — from solar PV, wind, hydro, bioenergy, and other renewable power sources – rose by about 180 GW in 2018, the same as the previous year, according to the International Energy Agency.

Renewable capacity additions need to grow by over 300 GW on average each year between 2018 and 2030 to reach the goals of the Paris Agreement, according to the IEA’s Sustainable Development Scenario (SDS).

Last year, energy-related CO2 emissions rose by 1.7 percent to 33 Gigatonnes. Despite a growth of 7 percent in renewables electricity generation, emissions from the power sector grew to record levels.

“The world cannot afford to press pause on the expansion of renewables and governments need to act quickly to correct this situation and enable a faster flow of new projects,” said Fatih Birol, executive director of IEA.

China added 44 GW of solar PV in 2018, compared with 53 GW in 2017. Growth was stable in the United States. Solar PV additions increased in the European Union, Mexico, the Middle East and Africa.

Capacity additions in the European Union, the second-largest market for renewables, dipped. Solar PV grew compared with the previous year, while wind additions slowed down. Policy transition challenges and changing renewable incentives resulted in slower growth of onshore wind in India and of solar PV in Japan.

Renewable capacity expansion accelerated in many emerging economies and developing countries in the Middle East, North Africa and parts of Asia, led by wind and solar PV as a result of rapid cost declines.