The car rental service provides a variety of green vehicles across Los Angeles. They include popular hybrid, plug-in and TDi vehicles.

The new Tesla Model S full electric car uses the equivalent of 74.5 miles per gallon, according to Motor Trend. 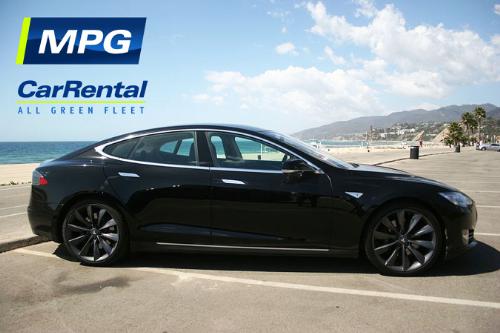 According to Motor Trend Tesla Model S would use the electric equivalent of 118 mpg on the popular holiday road trip from Los Angeles to Las Vegas. Drivers can expect around 31 miles of range per hour of charge. This electric engine is technologically cleaner than any traditional or even hybrid vehicle because it does not emit any exhaust.

Tesla Model S comes with features like keyless entry, which can unlock the door and even start the car without leaving your pocket.  Futuristic door handles retract into the body to streamline airflow, or slide-out when the driver approaches.

The electric charger cord in the car is as simple to use as the one for your phone. The Model S charger is compatible with both 240-volt outlets or 120-volt.

Some of the green cars offered by MPG Car Rental include the BMW i3, Volkswagen Jetta TDI, Chevy Volt, Honda Insight, Toyota Camry Hybrid, Toyota Prius and large SUVs such as the Toyota Highlander Hybrid, and Chevy Tahoe Hybrid.